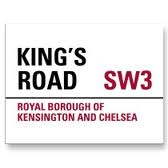 (continued from The King of King’s Road (8))

Each night, the homeless man unrolled his foam pad and sleeping bag and carefully laid them with his pillow on the ground next to his shopping cart. The overhang from the building sheltered him from the weather. The posh Chelsea neighbourhood generally assured his safety.

One night, while he was sleeping wrapped warmly in his sleeping bag, the homeless man suddenly felt a jolt and woke to find a gang of young men shrouded in hooded sweatshirts, each with baggy denim jeans and unlaced trainers, the uniform of London’s thugs. One of the young men began to kick the homeless man repeatedly and taunt him with foul language while another urinated on him. Another of the young men toppled the shopping cart and began rifling through its contents, finding the radio and taking it. The others crowded around and shielded the scene from the view of late night revellers staggering home from the local pubs and clubs.

After absorbing several blows, the homeless man managed to free himself from his sleeping bag and scramble to his possessions scattered along the sidewalk. He quickly rifled through the mess and found his Rubik’s Cube. He turned away from the gang and faced the building as if to pretend they weren’t there. As he did, he began to twist and turn his Rubik’s Cube, quickly finding it’s solution. He then scrambled the tiles and did it again. His assailant stopped kicking and curiously began to watch as the homeless man played with his toy in the face of the relentless assault. Soon the other gang members gathered and began to stare at the crazy man with the Rubik’s Cube.

This entry was posted in Fiction and tagged Fiction. Bookmark the permalink.