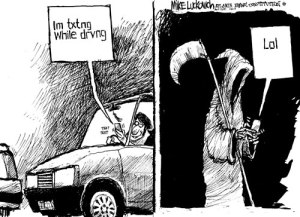 I am not a good driver. I easily get distracted and lose my concentration. As a result, I can’t understand how and why other drivers do some of the things they do while driving. In addition to talking and texting on a cell phone, I have seen people drinking coffee, eating a burger, putting on make-up and looking at maps while driving. On a blog called Texting While Driving, the sole mission of which is to educate people on its dangers, I saw a poll in which over 60% of the respondents admitted sending a text while driving.

It is amazing that people are so clueless that some states actually have to enact specific laws to regulate this activity. Thirty-four states have laws prohibiting text messaging while driving. Why can’t people figure out for themselves that this kind of behavior is absurdly dangerous?  What’s even more astounding is that seven states only prohibit text messaging for novice drivers and three states only prohibit it for school bus drivers! And only three states appear to have laws that would make it a traffic violation to drive while drinking coffee, or eating a burger, or putting on make-up, or reading a map, or changing a baby’s diaper, or having sex, or juggling flaming knives (in one of those states, it would only be a violation if coupled with some other traffic violation).

Are you among the clueless?