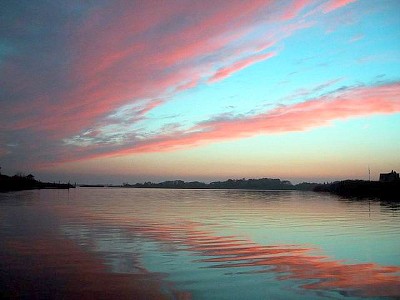 September is summer’s best kept secret. The Summerfolk have gone and the kids have returned to school, leaving the East End of Long Island to the locals, the tradesmen and the retirees who’ve yet to flee south for the winter. The roads are clear and the restaurants are suddenly accessible. The farm stands are still bursting with tomatoes, corn and homemade fruit pies, and the time to pick apples and pumpkins is upon us. The air is crisp, the skies are bright and the sun lies low in the sky, glistening off the ocean and bay.

Each morning I safely ride my bike, unthreatened by August’s speeding BMW’s running stop signs while their drivers talk on their cell phones. I cover miles along the beaches, ponds and back roads without ever seeing a car or truck. Upon my return I head to the beach for lunch, some reading and a nap without fighting for a parking space or being awoken by a crying child or maddening game of Kadima. The ocean temperature is surprisingly warm. Just before dusk I head out on Sam’s Creek and Mecox Bay in my kayak, alone and tranquil, to witness the herons, egrets and passing Canadian geese feeding on the jumping fish, with only the symphony of wildlife as the soundtrack to my evening’s exercise.

In the evenings, the movie theaters have abandoned the summer fare of sequels and gross-out comedies in favor of indie or foreign films, festival favorites or award hopefuls. The TV networks have begun their new seasons. The Yankees are still in the thick of a pennant race. The Jets and Giants have begun their campaigns and not yet given up hope. The European soccer season is underway with ample coverage of Chelsea by ESPN and Fox Soccer Channel. On weekends the villages host harvest and harbor festivals offering home-cooked recipes with fresh local produce. The art galleries and museums are still stocked with shows proudly displaying the East End’s rich artistic history.

October is pretty good too.